Your Dentist Probably Uses a Cleanwipe 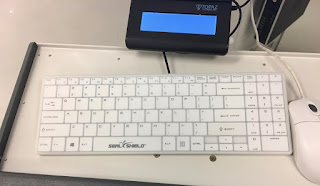 Last month my dad texted me asking me the name of the company I work for. I told him “Seal Shield.” He then texted me back (in Portuguese) “Yes, that’s right. I’m at the dentist’s office and they are using your keyboard here.” At that moment, despite Seal Shield selling a large variety of keyboards, I knew exactly which keyboard he was referring to- the Cleanwipe. Sure enough, my father then sent me this picture and that’s exactly what they were using.

As I have mentioned many times before, the Cleanwipe is actually my favorite keyboard. I simply love the removable cover and the way it feels in my hands. Dentists, however, have their own set of reasons why they seem to exclusively buy the Cleanwipe series.

1. The Cleanwipes are some of the most ergonomically designed keyboards ever. It’s a series of keyboards that utilize space better than any other. For dentists’ offices that are notoriously pressed for space, these are the ones to use.

2. Clean. Wipe. The Cleanwipe has a removable cover that you can wipe with a disinfectant wipe in between patients in a matter of seconds. No digging in between the keys. No cracks or crevices.

3. Dentists frequently have a bit of splash that gets on the keyboards when they’re treating someone. Therefore, it’s crucial to have a keyboard that you can quickly clean. You might find this keyboard in emergency rooms for similar reasons.

4. They are easy to use and despite being engineered to withstand bleach and even run in the dishwasher, they don’t require you to sacrifice any usability.

Though it seems like this keyboard was designed by a dentist, I actually use it in my office and at home. Several non-medical related businesses use them as well. It gets a reputation as a dentist keyboard and for good reason but is really functional and the easiest one to clean.
Posted by Marcus Pinto at 10:35 AM