Orlando, FL., SEAL SHIELD, LLC - Almost a hundred thousand people are dying in the US per year as a result of healthcare-acquired infections (HAIs.) According to The Centers for Disease Control (CDC), 80% of infections are transmitted by hands. But what hasn’t been accounted for is the large amount of screens that are now acting as an extension of people’s hands, but not getting cleaned nearly as often, if ever. According to Dr. Charles Gerba a microbiology professor at the University of Arizona, "Mobile phones are now mobile germ devices."

This issue is not limited to hospitals. Touch screen displays have become part of the restaurant experience with many top chains such as McDonald’s, Olive Garden and Panera Bread adopting them as a way to reduce labor costs. While touch screen technology has improved efficiency in the food service industry, there have been significant negative consequences. Recent studies have shown wide-spread contamination of these screens which can result in gastrointestinal infections in food service workers and restaurant patrons.

According to Dr. Paul Matewele, a senior lecturer in microbiology at London Metropolitan University, “We were all surprised how much gut and fecal bacteria there was on the touchscreen machines. These cause the kind of infections that people pick up in hospitals. For instance, Enterococcus faecalis… It is notorious in hospitals for causing hospital-acquired infections.” 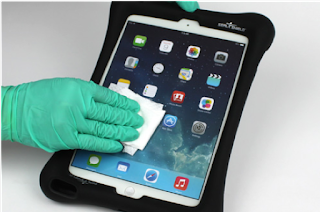 Regular cleaning and disinfection of touch screens can prevent the transmission of dangerous bacteria, fungi and viruses. However, most screens are not compatible with proper cleaning agents, and will rapidly deteriorate when subjected to effective cleaning procedures. One may believe that because Apple, Samsung and Google recommend that most cleaning agents not be used on their devices, that the devices are safe to be used without proper disinfection. This is a dangerous fallacy. Medical grade screen protectors are the solution, allowing touch screens to be properly disinfected with no material degradation to the equipment.

When buying a medical grade screen protector, it is important to look for the following qualities: It should have optical clarity and not interfere in any way with the use of the device. It must protect the screen from impact and be scratch-resistant. It must allow the screen to withstand harsh cleaning products that properly disinfect the device. It must also feature anti-microbial product protection, a feature absent from consumer grade screen protectors.


Seal Shield, a leader in healthcare infection control solutions, is launching a brand-new category of medical grade screen protection that addresses each of these concerns and allows for a disinfection routine such as cleaning with bleach, isopropyl alcohol or other common commercial cleaners, which can help prevent infections. The product is called Seal Screen and is a groundbreaking solution for both the healthcare and food service industries.

According to Bill Bramblet, VP of Business Development for Seal Shield, “Seal Screen was developed in response to demand from hospitals for solutions that can reduce cross-contamination infections known to be spread through touch screen devices, but we are seeing increased applications for the food service industry as well.”

Seal Screens are a cost-effective solution for mitigating cross contamination infections and protecting expensive equipment. Seal Screens are custom cut-to-order, making them compatible with any size or type of device from smartphones to big-screen monitors.
Posted by Marcus Pinto at 9:00 AM