Bill Gates once said that “if GM had kept up with the technology like the computer industry has, we would all be driving 25-dollar cars that got 1,000 miles to the gallon.” This statement received a lot of press and GM even countered with an official statement saying (among other things) that if GM developed technology like Microsoft, you would have to buy a new car every time they repainted the lines in the road.

Seal Shield, in the cross-section of medicine and technology, has created a device called the ElectroClave which is as revolutionary as Microsoft Windows once was. It’s a UV disinfection box that disinfects mobile devices more effectively than any other device on the market killing up to 99.9999% of germs on your phone in only six minutes. On top of that, it can charge, sync and reimage multiple devices at a time and track each time a device is inserted and removed from the machine. But perhaps the most incredible feature of the ElectroClave is that it can track an entire organization’s disinfection habits and send individuals text and/or app reminders when their phone or tablet is due for their next disinfection cycle. It can also keep track for the organization who’s been following proper disinfection protocol and who hasn’t.

This is such a major breakthrough that it might be fun to delve into the same types of comparison that Bill Gates once made about Microsoft and GM. For instance, if laundry machines kept up with the ElectroClave you would receive a text message whenever your clothes or sheets needed washing. If textbooks advanced as fast as the ElectroClave, they would text your kids whenever they were behind on their reading. If refrigerators were as intuitive and helpful as the ElectroClave, they would text your roommate that they better not eat the last piece of key lime pie and let you know if he had eaten it anyway. 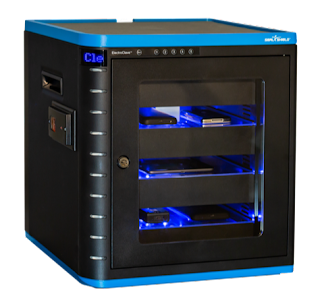 The ElectroClave took such a large leap forward in disinfection technology that when you compare it to the minor advancements of other industries it becomes even more impressive. And how lucky we are that this advancement came in the medical space. Almost a hundred thousand lives are lost on a yearly basis as a result of hospital-acquired infections- more than diabetes. With this device, the dangerous cross-contamination points that are cell phones and tablets can be effectively disinfected and healthcare organizations can be put in a position to significantly improve their hand hygiene, which in turn can reduce infections.

The ElectroClave has been nominated for the 2020 Edison Award as a result of its incredible innovations. In the past, the Edison Awards have honored visionaries like Steve Jobs and Elon Musk with their awards. Products that are sold business to business don’t often get the press that consumer products do, but make no mistake, the ElectroClave is a product that will affect millions of people in years to come.
Posted by Marcus Pinto at 10:03 AM