Infection Control Is Something for Hospitals to Be Concerned With Everyday, Not Just When an Operating Room Is Shut Down

It’s been reported that the operating room of a Utah hospital was temporarily shut down after an inspection found “serious” issues with sterilization. The shutdown happened last July, but it’s only coming to light now as a result of a Utah woman whose mother died at the hospital of a healthcare-acquired infection. She went in for a gallbladder removal surgery and never came out alive.

It turned out that around the time this occurred, the facility was being investigated by the state health department. According to the health officials’ 55-page report, “the hospital failed to provide a sanitary environment to avoid sources and transmission of infections and communicable diseases.” It further concluded that the situation presented “immediate jeopardy” and that dirty instruments had been used on patients.

This represents a catastrophe for the hospital, its patients and the patients’ loved ones. The right thing for hospitals to do both for their bottom line and for their patients is to address these sorts of issues before they occur as opposed to after their operating room is shut. These types of fatal errors can not only cost a hospital millions of dollars in immediate damage but can also irreversibly damage their reputation which is even costlier.

“Instruments” that often get overlooked are the ones on the technology side. Keyboards, mice and tablets are present throughout hospitals, but oftentimes aren’t cleaned as often as other devices. Keyboards contain more bacteria on average than an average public toilet seat. Imagine how silly it would seem to go through all the effort to maintain a sanitary hospital environment only to keep a dirty toilet seat next to a patient’s bed and constantly interact with it. That’s essentially what many hospitals do. 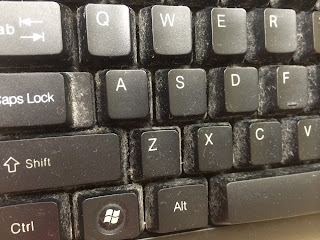 It’s essential for hospitals to properly disinfect their keyboards and mice as opposed to just cleaning them. In order to do so, it’s necessary to have washable keyboards and washable computer mice that can withstand both water and harsh cleaning products that can actually get the job done. Seal Shield’s various types of medical-grade keyboards and mice are as functional as any keyboard out there, while still having the features that make them ideal for healthcare. On top of the washability, Seal Shield Keyboards and mice also feature anti-microbial product protection making it a one-of-a-kind solution that not only meets standards but exceeds them.

Similarly, tablets have infiltrated both our personal lives and business. Healthcare is not an exception. While an iPad may not be considered a surgical device, they are used in surgery. Therefore, they must be properly disinfected. Unfortunately, Apple advises against using cleaning products on their devices. iPads can withstand being cleaned with a damp cloth but will regrettably damage if you use harsh cleaning products on them. The answer is to get a medical screen protector that allows you to use the products that will actually keep your tablets not only clean, but disinfected. Seal Shield makes custom screen protectors for various healthcare organizations and have proven to be an excellent solution to those who want to make sure their latest technology isn’t just adhering to health standards but going above and beyond them.

Many hospitals are also allowing their communication devices to negate their hand hygiene. You see, smartphones are some of the dirtiest devices that we touch. They are ten times dirtier than the average toilet seat. It’s even worse if you consider that a nurse or a doctor might be treating someone with a contagious illness and then touching their phone. The pathogens that they come in contact with will remain on their phones even after they wash their hands and will continue to negate hand hygiene so long as the phones are being used.

So what’s the solution? Are healthcare professionals to stop using their mobile devices? Absolutely not. The genie’s out of the bottle in terms of that. The only logical solution is to disinfect the phones. There are many devices that can disinfect phones to varying degrees of efficacy, but none can provide a more comprehensive and effective solution.

The ElectroClave is a UV disinfection box that not only can disinfect several devices at once while simultaneously charging them, but it can also keep track of an entire organization’s mobile-device disinfection habits and remind people when their device is due for their next disinfection cycle. It’s the most comprehensive UV-C disinfection solution available today and can take a healthcare organization’s efforts to maintain good hand hygiene to the next level.

What’s important to take from all of this, isn’t necessarily just to buy a washable keyboard (though it couldn’t hurt), but rather to adopt a preventative mentality towards infections rather than a reactive one. When you are proactive about this, it’s beneficial in every conceivable metric. It’s better for the patients, who receive better care. It’s better for the hospital employees who themselves are safer and more productive when they aren’t exposed to dangerous contaminants. And it’s better for the hospital’s bottom line when they prevent millions of dollars in losses attributed to healthcare-acquired infections (HAIs) and in this more extreme case, an operating room getting shut down.
Posted by Marcus Pinto at 8:53 AM