This is perhaps the most underrepresented issue in terms of media coverage and notoriety. If you turn on any news channel, you are probably going to hear about someone dying in a car crash a thousand times before you hear about someone dying from a hospital-acquired infection (HAI.) There are usually about 40,000 traffic fatalities on US roads per year. Suicide certainly gets a lot of attention and for good reason. In 2017, 47,173 committed suicide in the US. Diabetes, which is one of the deadliest and most feared diseases killed roughly 80,000 people in 2017. Can you guess how many people die annually from the little talked issue of Hospital-Acquired Infections? If you had to guess based on media coverage, you might surmise that it’s somewhere around a thousand, but it’s actually 99,000 people.

Hospitals have taken notice of the issue, even if mainstream media hasn’t and have certainly taken measures to avoid these deadly infections. It’s been discovered by the CDC that 80% of infections are spread through hands and as a result, hospitals have taken great measures to make sure everyone is keeping their hands sanitary. However, there is one major problem that has overlooked by many: cell phones.

Many hospitals are allowing their communication devices to negate their hand hygiene. You see, smartphones are some of the dirtiest devices that we touch. They are ten times dirtier than the average toilet seat. Imagine if your doctor was touching a toilet seat after washing their hands and then treating you. Would you feel safe? Do you see how this can be a problem?

It’s even worse if you consider that a nurse or a doctor might be treating someone with a contagious illness and then touching their phone. The pathogens that they come in contact with will remain on their phones even after they wash their hands and will continue to negate hand hygiene so long as the phones are being used. So what’s the solution? Are healthcare professionals to stop using their mobile devices? Absolutely not. The genie’s out of the bottle in terms of that. The only logical solution is to disinfect the phones.

As I’ve mentioned in previous posts, Apple and Samsung products aren’t very friendly to cleaning products. I have also been known to recommend the new Seal Screen line of screen protectors that allow for the use of cleaning products to disinfect phones. But there is another more comprehensive solution that healthcare organizations should be aware of. It’s called the ElectroClave. 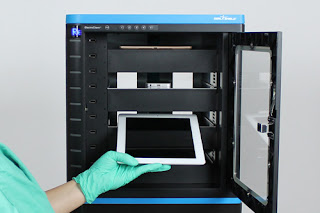 The ElectroClave not only can disinfect several devices at once while simultaneously charging them, but it can also keep track of an entire organization’s phone disinfection habits and remind people when their phone is due for their next disinfection cycle. It’s the most comprehensive UV-C disinfection solution available today and can help a healthcare organization be a part of the movement to reduce HAIs.
Posted by Marcus Pinto at 12:40 PM